Death is much a part of life and whether that’s the death of a loved one or the end of a relationship  the heart cannot discern, for the most part it is just intensely painful. The heart chakra (centre) often feels ripped apart, a gaping hole revealed that many fear will never heal.

How do you process this horrendous pain and will it ever stop?

There are stages in bereavement such as shock which can equate to numbness physically and denial psychologically, sometimes heard as “I can’t believe it”. Then there’s anger which if unexpressed can lead to depression, you might hear this as “why them, him/her/me, why now? Guilt is also part of the process, no matter how amazing you were, you’re likely to find a way to feel guilty about something you can hear that in the statement “If only I’d …”

There are others, but these are the main phases that we cycle through until eventually and hopefully we one day find some acceptance of our loss. That can take  weeks, months and for some, many years.

Personally from my perspective as a psychotherapist I believe it’s dangerous to bottle up emotion,  I subscribe to the school of thought that says ‘the body will express what the mind is concerned with’. If we don’t find a way to let go of our anger, guilt, and shock, the body will have to deal with it.

In some cultures there is a ritual known as the death wail, a wailing lament that takes place after the death of a family member or tribe, as part of the mourning. 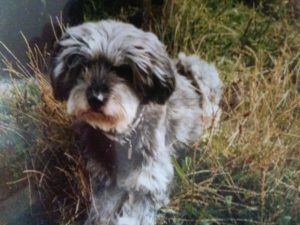 I wasn’t familiar with the death wail, but when my dog died after 18 years of unconditional love, devotion and loyalty the pain was indescribable.  I sat for three days (not continuously) on the top of my stairs staring out of the window and chanted the Om sometimes written and sounded as AUM (this is a word found in yoga philosophy).

By day two I had a sense that this sound was carrying her on her journey, which brought me some comfort and on day three I stopped as suddenly as I’d started. I continued to mourn her passing and still miss her 20 years later but it did alleviate some of the intense pain I felt at that time.

When we’re in a state of bereavement we can feel fear and heartache, which  affects our ability to breathe fully and freely. Chanting is an out-breath, an exhalation. Whilst chanting the Om might not be everyone’s cup of tea, you might find chanting through the vowel sounds A E I O U until you find the sound that resonates well with you, helps you to release some pent up emotions.  Do it for as long as you feel is right for you … it just might help.

I wonder how you deal with loss? Please share because your comments below could be really helpful to someone else.