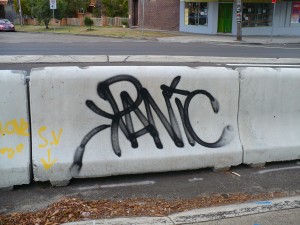 Many years ago Petra came to see me to learn to ‘cope’ with her fear of flying and  panic attacks. When I asked why now, she told me she’d recently been on a plane journey back to England where she thought she was dying!

So certain were cabin crew that she’d suffered a heart attack, that an ambulance was waiting at the airport to take her to hospital.

Petra told me she was discharged later that day and the Dr’s were extremely angry that it was just a panic attack and not a heart-attack!  They felt their time had been wasted.  She said she felt embarrassed and knew that it was time to do something about the anxiety that had been steadily getting worse.

That’s an example of how powerful anxiety can be. Anyone can suffer from anxiety for all kinds of reasons and at any stage of life.

In my experience there is no, one underlying reason and therefore no, one specific cure that fits all.

What I will say with total confidence is that panic and anxiety tend to be feelings, emotions, rather than thoughts and those feelings invariably live in the body not the mind.

Talking therapies are great for helping people to understand why they feel the way they do, but more often than not, the feelings remain to be ‘managed’ or ‘coped’ with.

It is my belief and professional experience that you do not have to live with such feelings. Feeling panic and anxiety is not a ‘natural’ way to be.

In treatment Petra discovered the root of her flying anxiety, stemmed from a childhood experience. Caught up on the top of a ‘Big Wheel’ at the funfair, her older brother thought it was great fun to rock the chair, which terrified 5 year old Petra, who thought she was going to die!

Obviously they got off of the ride and time moved on…

Thirty years later Petra, sitting in my therapy room, had consciously forgotten this one-off memory, her body hadn’t though. The paralysing fear was stored in some of the systems in her body: her nervous system, digestive, cardio-vascular and respiratory systems had registered these feelings. This somatic memory was also in Petra’s organ body, her heart, lungs and stomach had recorded the emotional memory. Much like a scratched record that keeps jumping and replaying the same bit over and over, Petra’s body was effectively doing the same at an emotional level.

On the flight home, her inner child was terrified. Her ‘tummy’ in fight or flight mode was clenched and she was holding her breath.

Allowing 5 year old Petra to release the pent up emotions of fear, anger and tears via her Adult-self left her free from anxiety, free of her past and free to travel by plane anywhere in the world!  Oh and boy did she! I received post cards from her flying in a single engine aircraft, a helicopter and over Niagara Falls!

Whilst we grow up intellectually and chronologically, we do not grow up emotionally. Emotions from something that happened 2 weeks ago or 20 years ago can stand still in time (in the back of the mind) and be correspondingly logged in a physiological holding pattern within the body.

The short cut is to change the way you feel, when you release the negative feelings from old memories, very quickly the negative thoughts that belonged to that memory, become redundant, because they have no purpose.

So there you are, you know what needs to be done to free up more energy in the here and now!